I remember the first time I laid eyes on a horse and realized, in that moment, I would make it the most important animal in my life. I was about 5 years old at the time.

Growing up, I was always told that I was bitten by the “Horse Bug”. I now know it’s in my blood and I am actually a fifth generation horse owner. I grew up in Texas on the south side of the King Ranch, where we all know that real barbecue is actually Beef Brisket, Hallelujah!

I was 13 when I got my first horse job and my boss, Dave Morgan, was about 72 at the time. He was an old tough cowboy who owned Foundation- bred Quarter Horses (The Invester 1969-2002). He told me the only real horse is the Quarter Horse, and if I ever owned anything else he would turn over in his grave. Well, I guess he’s turned over about four times now.

My first horse was an ex Barrel Racing Appaloosa and she was hell on wheels, I loved her! She had a baby and I started her myself, with the help of my children being used as gunny sacks for small weight when she turned two. Later, I acquired my first Foundation Quarter Horse mare, Skipa King Bar (Doc Bar, Skipa Star, Two Eyed Jack- bloodlines). She is a true beauty. Her babies came next and then a wild Arabian that I caught, tamed and trained. Last but not least, an off the track Thoroughbred, Mrs. Issues Galore. I worked with her and calmed her anxious temperament. She became my daughter’s gentle giant. For a span of over 25 years I started my own horses then schooled them in small town shows for practice for the West TN & MSQHB.

I always wanted some type of horse related job. I started working at the Horse Review in September of 2008.  It is hard to believe it has been 14 years now. My first boss was Don Dowdle, whom I attended church with for 15 years. I showed up to work at 6 am to drive him to his cancer treatments in Memphis. During our trips he would shove the Horse Review in my lap and tell me to contact folks about placing classifieds. I remember saying,  “Don most folks aren’t even up yet!” He would then say, “that’s a crying shame, they are wasting daylight!” Our conversations would continue and I always said, “that’s impossible, it’s not even daylight yet.” That’s how it always went with us, until he passed later in October of the same year.

The Brannon’s then bought the Horse Review and decided to move it from Somerville, Tenn. to Arlington, Tenn. where the office is now. After over a decade of expanding it to cover all disciplines they have now passed Don’s legacy onto Lauren Abbott, the Horse Review’s current owner and Publisher. I know she will add to Don and Tom and Nancy’s legacies and make it uniquely her own.

I worked with Lauren as a co- worker years ago, and I still remember how laser focused she was about her tasks. I always admired her and never dreamed she would one day become my boss. Not much has changed. She is still laser focused and a bit of a perfectionist so y’all are in good hands. That’s my story; my life with horses, and years with the Horse Review, and I’m sticking to it.

Hometown Cowboy, Will Lummus, Returns to NFR in Las Vegas

A Look Towards the New Year 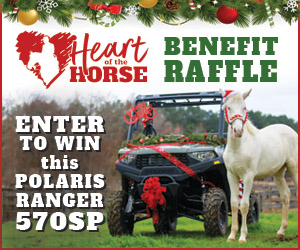